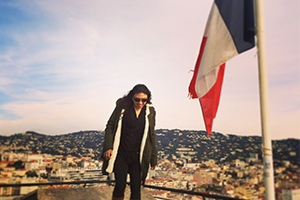 My love for scent was reawakened in 2012, when I was drinking in a roof top garden of a swanky members club in the West End with a friend of mine. We discussed (over a number of cocktails) what I could do outside of the normal 9 to 5 job and I remembered making a scent at one of these Event Shows I had worked at in 2009. It got me thinking and by the end of the night, we created an action plan of the next steps. Agreed that I needed to research the industry, watch a film called Perfume (bear with me on this), about a young man who travelled to the Provençal perfume capital of Grasse, killing women along the way to make the ultimate love scent, but it’s the process that I needed to pay attention to, creating scent the old fashioned way.

In January 2014, I embarked on my solo journey to the South of France, to the famous place where scent was made centuries ago, Grasse. Having never been to France in all my 38 years, I was really looking forward to the adventure and learning everything I can about making fragrances.

As I came off the plane at Nice airport, I couldn’t help but smile, clear blue skies, sun was shining, palm trees along the coast and at a distance I could see the snow on the top of the Alps, beauty is the Cote d’Azur. Having spent some time in Cannes – out of curiosity to see how the other side live, I took a bus to Grasse where I was staying for the week.

Galimard, the oldest perfumery house and the most recognised in the world is where I began my training; learning from top perfumers and created my signature scent N-Lyten.